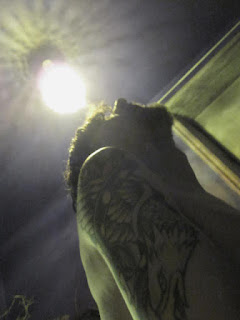 Black Sun Roof: Path of least resistance/Trash Strata: it’s as if we force our Daemons into view by not preparing properly, by doing the lazy half assed unthought wrong sounding/wrong pedals music, AND IT SOUNDS FUCKING AMAZING. So either we’re savant/geniuses, OR we’ve enlisted the help of the Most Helpful Helpers, and as we swoon and fall back at the very edge of the abyss, we are caught and borne up into Richard Wagners Palace and Britney’s Zone.

Nor should we think too highly of this dexterity of our wisdom when at times the wonderful harmony created by the playing of our instrument suprises us all too much  - a harmony that sounds too good for us to dare to give credit to ourselves. Indeed, now and then someone plays with us – good old chance; occasionally chance guides our hand, and the wisest providence could not invent music more beautiful than what our foolish hand then produces.  Nietzsche. The Gay Science. 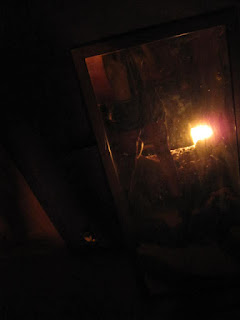 Past lives: for no obvious numerical reasons, I have always felt some ‘significance’ of my birth year, 1962, a year who’s sole incident of import for me seems to be that it was the year that marked the passing beyond of Georges Battaille, who wrote: If I possessed within me the musical resources to communicate my feelings, what would eventuate would be an explosion. An explosion that, at one and the same time, would be both a languorous demented wave of sound, and the expression of wild joy – a joy so untamed, however, that listening to it there would be no way of knowing if it came from my laughing or dying. And this is to some extent, the Great Work that I continue. 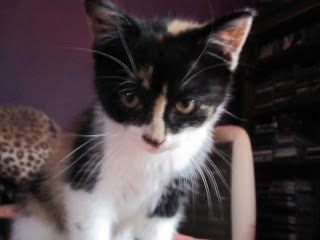 I think we need to aspire to The Wisdom of Brujo more completely, give our lives to it. And though this ‘wisdom’ appears, to the thinking mind, like  insanity, or ‘no mind’, you have to take the plunge, cut the reins, perform the most ridiculous, worthless act, to enter the realm of the white, feral, Goddess. 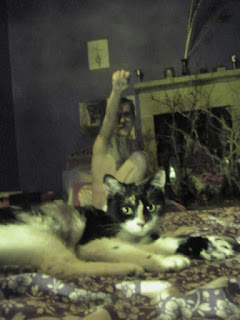 Bathe in the centre of sound, as in the continuos sound of a waterfall. Or by putting fingers in ears, hear the sound of sounds. 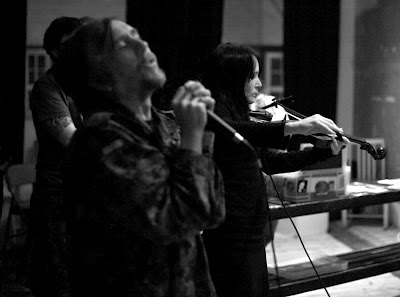 For any further information, e-mail mmatthhewbowerr@hotmail.com
Posted by Skullflower at 09:13 No comments:

Black Psychedelia: ‘one of these days I’m going to cut you into pieces’ and other carrion.

I have a problem w/ the term ‘psychedelia’ ; negative associations of a ‘hippie’ falseness, nevertheless my arte is, I know, deeply psychedelic in a true sense, a kind of synaesthesisia, a scrambling, an overload that seeks Samadhi in its primal gush, that will reconnect one with the all, or rather, a ‘black psychedelia’, substituting the elective current, for ‘all’…

And now, what I wish to speak of, the Voltigeurs LP, ‘Carrion’, of which we are deeply proud. We had worried about the worthiness of the material as it was all recorded in one day in the studio, then the release had been subjected to lengthy delays, mainly our fault, an abortive first mastering where overly good studio monitoring had led us to boost wrongly, (also a pharmacological state that was linked to our pleasure thirsting, and possibly not conducive to audial attentiveness) and a remastering that improved on some levels but ‘seemed’ to lose some of the best original sounds... Similarly, the artwork got lost between the original screenprinters, and had to be redone and the secondary printing option seemed to be less ideal… BUT when we received the finished article, it looks beautiful: full of nuance, the glyphs on the front are as alluring, endless and puzzling as we could have ever hoped (it is an embellished copy of a detail (a neck) from a Redon b/w reproduction in a book, of a colour work, that may have been added to by a hand unknown, suggestive of a necklace…) the photograph on the back seems even more beautifully composed and focuses through a succession of ‘framings’ the notion of mirroir as Gateway to other realms, and a smaller obsidian mirroir has become… The black egg (girl w/ serpent), microcosmic cipher of the great work, the figure more sphynxlike, and in the mirroirs depths, more phantasmal glyphs that echo the front covers ones in their tantalising suggestiveness…

And then the SOUND of the LP: magnificent and rich, stately and grand. To return to my original squirming about ‘psychedelia’ I have long had a ‘block’ about some of my favourite formative sounds, namely the beautiful cold power of the best early/mid seventies output of Pink Floyd, but lately with joy we have returned to ‘Obscured by clouds’, ‘Wish you were here’ and, most importantly, ’Meddle’, and it was with surprise and pleasure we heard the unmistakeable heritage of side two of 'Carrion' in Roger Waters’ hypnotic one note basslines and echoes of Dave Gilmours crying guitar lines in the wolfhowls of ‘Sirius’. That our bastard noise could evoke the grandeur of the stars in a similar mode to cold tropes of our ‘progressive’ heroes was an unexpected joy.
(Of course one must almost wholly disregard the opening piece, ‘morning raga’ a slightly failed chaos, though I therefore enjoy the web of meaning set up between sound and a title that in common usage might suggest a healthful positive new dawn, though again I might draw a relation with some of  Pink Floyds self consciously ‘annoying’ pieces (solo pieces on 'ummagumma' etc) that offset the self contained majesty of their most focussed black psychedelic masterpieces (‘one of these days’ and ‘echoes’)).

A strange footnote to all this is the U.S. black metal act Nachtmystium's attempt of a similar alchemy with their recent ‘Black Meddle’ dyptich, 'Assassins' and 'Addicts', a working that we greatly appreciate, though one that works on a more visceral, pop level, for us…

As to the future, our current recordings as ‘Black Sun Roof’ are our most ‘blackly psychedelic’ yet and certainly embrace the malevolent machinery of Floyds ‘Welcome to the machine’ as well as Coil's ‘Musick to play in the dark’ (and it is worth pausing to contemplate the fact that Pink Floyds masterpiece of misanthropy ‘Wish you were here’ is graced, as were all their classic period (70-75) works, by beautiful sleeve artwork created by the Hipgnosis design company, who’s ranks included Coils’ Sleazy, who took the spellbinding photographs, that make up the cold alchemy of that albums ‘four elements’ artworks.)

Fragments from a Drama:
Ginger: I guess that means we’re mates.
Leroy: I guess so.
G: Can I call you Dad?
L: (Beat) No.
Ginger: o.k. (walks off. Perfectly feigned nonchalance)
Title: ‘NATURAL SELECTION’
Scene: outside the back door. Ginger has caught a young adult rabbit, it is still unharmed. He is holding it and nuzzling its neck. The terrified rabbit is frozen. It must be that playing dead is more effective generally than bolting or fighting, but in this instance those would be its only hope. Slowly, affectionately the neck nuzzle turns to little jaw grips and finally to a powerful bite.Avidly Ginger sucks the warm lifeblood. Close up of the Rabbits all knowing, uncomprehending Eye.
Later: the dead rabbit, decapitated, its head gnawed off.
Cf: Clarice's ‘revealing’ speech in silence of the Lambs.
Three months later:
Leroy enters and begins tenderly washing Gingers head with his soft pink tongue, delicately he soothes his furrows.
Ginger: Thanks mate.
Leroy; (Pause) I’ve been thinking. Mate’s a stupid word, dead common.We’re better than that boy.You can call me ‘Your Highness’.
Ginger: Thanks.(Beat) Dad.
Admonishments, Musings towards an Exigesis:
‘The problem of Evil’
Most people deny their Evil Nature from laziness. It seems ‘better’ to do so: better for them, less ‘harmful’ to others. Most who do embrace their Evil Nature, do nothing of the sort: they are showing off, puffing themselves up (Nietzches surface attractiveness to idiots; cf: battailles ‘Nietzche and the Fascists’ etc.)
‘Left Hand Path’
Most LaVey type BM Satanists have no understanding or gnosis, no Subtlety, they have climbed the first rung of the ladder, and will never go further. Their position is in fact, no different from never having started, or actually, slightly worse.
The ‘correct’ reading of, say, Tantrik texts or Jewish Mysticism is not just a sudden awareness that theAuthor’s ‘warnings’ are not all they seem, it is not as simple as reversing the ‘thou shalt nots’ into ‘do this’.
‘Which Changes?’
Is a ‘contact high’ in fact, the narcotic’s effect spreading beyond the subject and infecting surrounding reality?, Not just effecting people, but surroundings as well. Also I suggest that only the magickally charged narcoticised person can do this, not the gibbering wreck, the trolleyed moron.
‘Zeitgeist’
David Lynch. (TM. Network of meditators ).some of his images come from outside, and he trusts and uses them without judging: something may be there that he has faithfully channelled but knows not, but it HITS YOU LIKE A TSUNAMI, AS IF THE IMPERSONAL UNIVERSE HAS JUST WINKED AT YOU, OR YOU HAVE GLIMSPED BEHIND THE CURTAIN, THE BACKDROP OF ‘INFINITE SPACE’
Fire walk with me, is as real as Lovecrafts nightmares (the psychic disturbance, the shared nightmare) The overlooked, too common sign, winking at you, bad taste: drugs, telepathy: Coil, NiN, Déjà vu.
Mephedrone, Sisters of Mercy: gnosis cannot be forced, right time, the universe reminds with a wink so gross, that we initially ignore it, it cannot be. PKD, WE ARE PALMER ELDRITCH tho we worried we were the duped colonists, and, is there a difference? also, end of scanner darkly,  little blue flowers. He has gone so far undercover, method actored, he cannot go back. Remember the episode of colditz, where brit POW feigned madness to win sympathy of guard (who had mad brother) and ultimately, release, however again, he had crossed over into real madness, never to return.
Cf: Nietzsche brings madness upon himself.
VALLEY OF FEAR, IXTLAN.
Coil: ‘Give sanity a longer leash’
Loves Secret Domain
John Keats: ‘Open wide the the mind’s cage door, she’ll dart forth, and cloudward soar,
Break the mesh of Fancy’s silken leash; Quickly break her prison string,
And such joys as these she’ll bring,
Let the winged Fancy roam, Pleasure never is at home’
Ode to Fancy
A hymn to the power of imagination over ‘reality’
- Matthew Bower, January 2012
Posted by Skullflower at 04:13 3 comments:

First attempt at the name

First attempt at the name (5/11)
1 vision: on the rock, skull split with light/dark. both flower and gash. yoni, third eye, ajna chakra opening, revealing the black light.
symbol: day of the dead skulls with flowers, skull with gash/fissure/mouth/vulva/flower, at the apex of triangle formed by it and eyes: opening/revealing.
variant: tree/flower grows from split skull
2 word; portmanteau, skullfuck/skullflower
what is live invocation now?: celebration and curse. my celebration is a curse on humanity, my joy their poison.
voudou: guehdhe: celebration of his darkness, via intoxication of the senses, musicke being just one.
- Matthew Bower
Posted by Skullflower at 04:11 No comments: